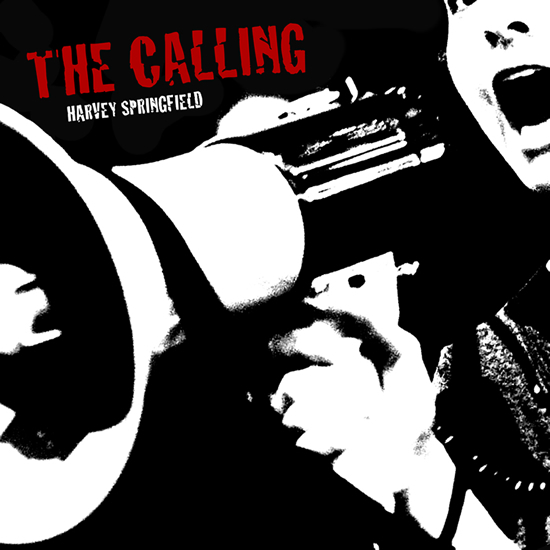 The Calling is Harvey Springfield’s third album. A Folk-Punk manifesto which exposes the decay of Democratic values taken over by individualism, bigotry, divisive politics and liberal economics. It’s also a celebration of comradeship with pounding drums, raging guitars, traditional instruments and chanting galore. Rather than mellowing down with age, Harvey’s sound and lyrics become edgier without losing the roots, just like Neil Young did in the late 70s with Crazy Horse. He brings out new influences such as Punk-Rock (Willie Nile, Green Day), Cowpunk (The Gaslight Anthem, Social Distortion, Cracker), Celtic-Punk (Dropkick Murphys, Flogging Molly) and Folk-Punk (Skinny Lister, The Pogues).

The album cover, based on an original photograph by journalist Bartosz Brzeziński during the Occupy Chicago demos in 2011, sets the tone for the title track. “Man Versus Man” sounds like a punked-up Protest song written by Bob Dylan or Woody Guthrie. “Bring The Crosses Down” questions how the Catholic Church has ill-used the crucifixion of Jesus as an excuse for oppression. “Your Inner Self” is a storming Cowpunk belter which explicitly shuts down any racist and sexist statements in the political arena. “Stuck Inside a Loop” satirises the monotony and payola practices of the Top 40 with sarcastic lyrics and a Ska vibe. The uplifting “Ready Once More” is an ode to resilience which contrasts with the farewell feeling of “Until They Kick Us Out”, an anthemic crescendo about expats, gentrification and the boomerang effects of Brexit. “Row” calls to action down in the galley with a cheerful folky spirit before “Raise Your Voices” demands our unconditional commitment with a live show energy. “Blood of the Land” opens up with a swinging guitar riff to tell us the real story of an oil spill disaster that happened four months before the 2003 Invasion of Iraq.
The album is wrapped up with a Celtic-Punk rendition of Dylan’s “Dignity” featuring an Irish drumming beat and an epic bagpipe melody which echoes Brendan O’Brien’s organ arrangement for the unplugged live version.

“Dignity” will be released as a digital single on Friday 7th September 2018 and available for download on Spotify, Amazon, iTunes and all digital music stores.